Why is Battlefield 2 so much better than Joint Operations? They’re both about big open playgrounds, distinct classes that complement each other, and a system designed to make people work together. Their engines present an astute combination of open swathes of land with detailed forests, bases, and cities. You can play down in the weeds or soar overhead in a helicopter. These kinds of team-based games foster a real sense of personal interaction, particularly if you hang out on the same server for a while.

Joint Operations forced a certain amount of patience in the way it got people to work together. You had to wait for a helicopter to fill up, or you had to sit patiently in the back of an APC in transit to the front. But Battlefield 2 appeals to people’s lack of patience to get them to work together. By being in a squad, you can spawn on your squad leader when you die, which is perhaps one of the best new gameplay mechanics in a first-person shooter since using iron sights. Planetside did something similar, but not as gracefully.

But Electronic Arts and DICE know how to cater to an audience. Medics can immediately bring you back into the fray and reverse the loss of a point for your team. Everyone loves a medic, but drivers have a very special love for engineers. Healing, repair, and re-supply are all in the hands of character classes rather than lockers scattered around the map. Support classes can affect an area rather than being forced to manually tend to every dinged tank or depleted magazine. There’s a balanced interplay between killing and keeping healthy that’s gratifying for everyone without forcing someone to play the cleric, as it were. And working with other players means not just getting into the fight faster, but staying there longer. Work as part of a cohesive squad that includes a medic, and you can hang around for quite a bit. It also means that when you kill someone, you’re not necessarily safe. You have to wonder if his squad leader is lurking over the next rise. When soldiers come, they come not in single spies, but in battalions.

Calling out contacts using a quick interface is another significant addition. You may not be able to do anything about that tank rolling up to your flag, but you can spot it for your team. This will hopefully get the attention of a helicopter, or at least an AT weapon, by flashing an icon on everyone’s minimap. The minimap is now a vital tool, crammed with easy-to-read contextual information.

Battlefield 2 also successfully borrows a concept kicked around in a Half-Life mod called Natural Selection and a little known game called Savage. Each team has a commander who enjoys the advantage of a god’s eye view and some special powers to help the players on his side. It’s a powerful new layer that introduces situations like guarding or attacking home base facilities that allow for artillery, recon drones, and radar. An engineer on defense or a special ops soldier on offense are viable new ways to play that have nothing to do with capturing flags. Artillery strikes are powerful enough that a team can’t afford not to use them. But the radar scans, which reveal all units to the commander, are arguably even more powerful when used well. There’s a lot of Battlefield 2 that won’t bubble up when you first jump in and play. It’s got a long, lean learning curve, with stat tracking, unlockable weapons, and team-based scoring that make the games matter even beyond the shooting.

There’s also something really playful about DICE’s shooter, almost cartoon-y, even though it’s disconcertingly topical. The different sides are the US, the Chinese, and, well, we’ll call them the Arabs. But it really comes down to “your guys” and “the other guys.” Battlefield 2 presents everyone without any value judgment, much less any substantial differences in strength or ability.

The Arabs have the same guided anti-tank missiles as the Americans. Everyone gets a good attack helicopter and a jet or two. Unlike Battlefield Vietnam, which had the historical conviction to distinguish between the Vietcong and the Americans, Battlefield 2 is about homogeneous combatants. The differences among the sides are largely aesthetic. For instance, in a struggle over an oil refinery, the US starts on an aircraft carrier while China starts in a ramshackle town, but their orders of battle are pretty much the same. With the exception of a few assault maps, it’s all cautiously egalitarian It also makes it more palatable that this Middle Eastern Coalition, as it’s called, is devoid of anything resembling insurgents you might imagine skulking around Iraq or Afghanistan. Instead, the character models are the sort of respectable military we might do maneuvers with in Egypt, or maybe some dudes in Syria dutifully driving home from Lebanon. They’re wearing uniforms, and they use Russian hardware. No turbans and no terrorists here. EA leaves the borderline tasteless content to its Command & Conquer series.

One significant difference is that each side speaks in its native tongue. At first, this seems like a nice touch. But since the comments are all relevant to gameplay—”I need a medic,” “Get in,” or “Enemy armor sighted”—you’re at a disadvantage unless you happen to speak Chinese or Arabic. You can switch to English dialogue, but then everyone sounds like a US Marine barking into a radio. Battlefield 2 would have been better served with the kind of accented English that the Chinese and Arabs speak in Hollywood. This is a war movie, and there ain’t no time to read subtitles. 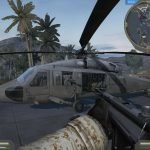 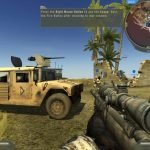 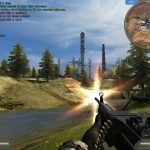 Problems with the game stem from the singleplayer portion, which is – as one may expect – pretty lackluster. The bot AI seems only somewhat more intelligent than those of Battlefield 1942, which were clinically retarded. The bots in Battlefield 2 do some stupid and nonsensical things as well (running you over with vehicles is very annoying, for one). A larger problem stems from the bot adjustment options, or lack thereof. There simply isn’t an interface to adjust the number or distribution of bots within the game, and you have to search online for info on how to hack the game files to do so. The same process has to be done to remove certain vehicles, which changes the game dynamic considerably. It’s odd how the game devs didn’t think it was worth implementing these choices.

But even before these problems get sorted out, Battlefield 2 is perhaps the single most thrilling instance of how far shooters can go. It’s another gear clicking into place in the slow Copernican shift away from lone heroes fighting an AI, to bands of soldiers working together online to discover and create their own semi-emergent properties. Who needs a story when you can have a squad of virtual soldiers charging a heavily defended control point?