The game looking incredible, as always.

It’s hard not to like Giants: Citizen Kabuto. For one, it’s rife with British humor that’s hilarious. Secondly, each of the three characters is very distinct. And then there are the visuals, which – despite a litany of minor glitches – are surpassed only by Sacrifice in their hue of vibrant colors. Giants is set on a huge floating space rock upon which three races of creatures – the jovial Meccs, sexy Sea Reapers, and the star of the game, Kabuto – find themselves vying for power. You begin Giants as the Meccs, but eventually switch to controlling the rogue Sea Reaper Delphi, before finally playing as Kabuto.

The gist of the singleplayer story is that the evil Sea Reapers are making life hideous for the island’s resident Smartie population. In controlling the Meccs, and subsequently as the Sea Reaper princess Delphi, your aim is to put a stop to the Sea Reapers’ tyranny once and for all. Kabuto comes into the picture midway through the game, when he’s unleashed by the Sea Reapers to destroy you. So you, of course, must destroy him first – a feat you can accomplish only by taking on his form.

So, with you controlling each race of creature for one-third of the game, Giants is essentially three mini-games in one. The Meccs are the techno-geeks of the bunch, able to wield a variety of modern weaponry – grenades, RPGs, machine guns, and so on – and zip about the landscape with relative ease thanks to their very MDK-like jetpacks. Delphi relies on magical spells, bows, and her sword to do her dirty work, and she can zip around with her Turbo ability and Jet Ski. Then there’s Kabuto, who relies on brute force to get the job done. 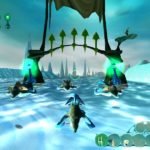 Giants’ racing bit – because why not? 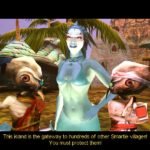 Fun fact – in the Beta version of Giants, Delphi didn’t wear a bra. 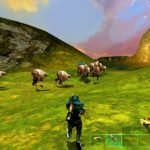 Want some strategy with that? While an action game first, Giants does incorporate elements reserved for RTS games – namely base-building and resource gathering. As the Meccs and Delphi, the mission structure evolves from pure action to establishing bases, and eventually fashioning an item or technology you need to defeat the enemy on that particular level. In a hilarious twist, the resources you need to gather are organic – Smarties, who construct your base, and Vimps, cattle-like animals that you need to hunt. The Meccs and Kabuto need Vimps for food. Delphi needs them for magic.

Building the bases is a bit of a yawn and quickly grows repetitive. Speaking of frustrating, there’s no in-mission save option, which is a major pain. Many of the 25 missions are relatively brief (30 minutes or less), but lots of them – most of the base-building missions, for instance – can take an hour or more to finish.

Considering all its problems, it’s a testament to the strength of Giants’ design that it still manages to be fun. The game is stuffed full of vibrant visuals and funny dialogue – no surprise, really, as Planet Moon consists of former Shiny folk who worked on MDK. If you’re a fan of that sort of game, then consider yourself fortunate.