What a strange and confusing journey it’s been. Legends of Might and Magic began its development as an ambitious first person role-playing game. Perhaps as revenge for all the so-so reviews of Might And Magic VIII, 3DO decided to pull a fast one and transformed the game into an online, first-person shooter. Two teams are presented – good and evil, and you get objectives that will seem familiar to regular Counter-Strike fans. Except here you fire your crossbow instead of your sniper rifle, and save the princess instead of saving hostages. The fantasy setting makes the game a curious oddity as an online shooter, but a host of balancing issues ruin a lot of its gameplay.

Ambitious heroes begin by choosing one of six good or evil classes — Paladin, Druid, and Sorceress on the good side, and Warrior, Heretic, and Archer on the evil. Picking a character determines the side you will be on as the forces of good battle against the forces of evil in one of four game types. Class differences, which supply much of the cool in online team games, are virtually non-existent. The only meaningful differences between classes are weapons and armor choices. You must purchase better weapons and armor at the beginning of each scenario. Money and weapons carry over between scenarios. You’ll find that once a few players have acquired the best weapons, those without them have a very difficult time advancing.

Strangely enough, there is no healing during a scenario; all damage accumulates until the next round. Certainly instant magic healing scrolls fit the fantasy theme better than instant first aid kits in military themed tactical shooter. No healing tends to make games very short affairs as players tally up damage and rapidly die. Why not offer a cleric class that can heal teammates? The unique setting promises endless possibilities, but Legends of Might and Magic seems satisfied to be more of the same. 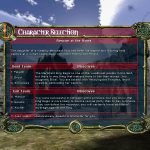 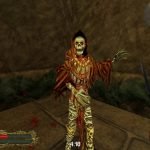 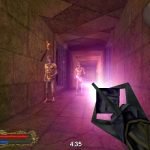 One thing that could be attractive about a fantasy shooter like Legends of Might and Magic is hand-to-hand combat with weapons such as swords, axes and maces. Unfortunately, magic and missile weapons are so powerful that you’ll never get close enough to even think about using a sword or spear. In fact, some of the weapons have more in common with sci-fi blasters than fantasy weapons, and some are powerful enough to score one-hit kills — a questionable design decision given that the game does not allow respawning. Other weapons will fire dozens of missiles that rebound off of walls and ricochet around rooms. These weapons make hiding almost impossible and add more frustration than fun to the mix. Legends of Might and Magic adds a few innovations to the shooter genre. Each scenario can feature monsters that will attack both good and evil characters. Though this generates some additional variety and another way to gain gold, the lack of healing generally makes these denizens more of an annoyance than anything else. Auto balancing causes players to automatically move from one team to another if there is an imbalance in number of players. This is a good idea if you are a lone player but if you want to team up with some friends it can be frustrating to end up on the team opposing your buddies.

Visually the game is a mixed bag. Locations are well modeled—especially outside areas, where mountain slopes and towers almost induce vertigo. Characters, on the other hand, possess bodies that seem somewhat blocky and out of proportion, and there are also the usual clipping problems that are common with the LithTech Engine. In the end, there just isn’t much reason to pick up Legends of Might and Magic beyond its curiosity factor. With crappy balancing and only mediocre gameplay, one can’t help but feel that the online shooter realm is a tad misplaced for a Might and Magic game.