I was a complete fan of Rome: Total War, having played it before Shogun and the original Medieval. Returning to its roots (sort of) while simultaneously keeping the stronger points of Rome and sprucing up the world with diplomatic niceties, Medieval II marks a healthy leap for the series. As with the previous entries, it flawlessly mixes real-time combat on huge maps, involving in some instances thousands of fighting men in epic battles, with a more subtle layer of diplomatic intrigue.

In the countries campaign mode, you can take up command of one of Europe’s fledgling nations and lead them to dominance. Strategic decisions, such as managing settlements, moving units about, or keeping tabs your neighbors, take place on the Campaign Map, which has the look and feel of a Civilization game. As you upgrade cities, it’s possible to see the countryside around them change from empty grassland to farmland, and see the roads fill up with wagons trading goods to and from your ports. Akin to any old-school Heroes or Warlords games, you also use cities as recruitment centers for your armies, steadily training better troops once your buildings (and population quotas) are good enough.

The primary and most stark difference in the way you build up towns in Medieval II (and every other preceding Total War game, for that matter) is the way you now must choose between developing each place as either a city or a castle. Each type has a discernible impact on the sort of buildings you have access to, and how quickly, but also in the amount of income they generate. Cities are economic centers that, in some instances, earn you twice the amount of gold that a castle can. The latter, on the other hand, offers you stronger military units earlier, and much sturdier defenses in the case of a siege. For a small penalty, you can rebuild your cities as castles or vice versa. Likewise, the Pope adds a new layer of complexity to the campaign game. He’s a sort of holy sheriff trying to keep the peace. This means that conquering the campaign map by destroying every faction is much more difficult. Fortunately, you can get in the Pope’s good graces by building churches, training priests, participating in Crusades and laying down arms when he demands it. You can also win favor by participating in the Papal elections, which takes place once every ten or so turns. Cardinals from different nationalities participate, which further plays into the game’s more complex diplomacy.

Other countries also hold the Pope’s influence in high regard, so when a faction is ex-communicated for whatever reason, every other faction can pile on them. Ex-communication isn’t as permanent a sentence as you might think, however – Papal favor will grow back, slowly. It might be annoying, but the system does have some level of fairness. For instance, I was once attacked by Denmark without provocation, fought back, won some territories, but was then scolded by the Pope to cease hostilities. I tried as much, even going as far as asking for a cease-fire, but the Danes were having none of it. After a few months of attacks, Denmark was ex-communicated, and I was allowed to destroy their faction. 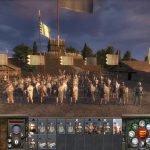 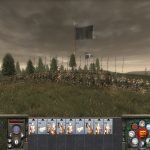 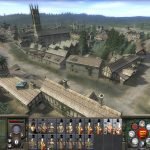 When armies finally clash the game goes into battlefield mode. You see an astonishing level of detail, right down to the faces of your men. Tactical considerations like formations, morale, tiredness, terrain and training all factor into how well your troops perform. It’s possible to maintain an organized fight – up to a point, but often things do degenerate into pixel wars. Groups of men aren’t as tightly knit as in Rome, and when order does break apart it’s often difficult to realize what’s going on. It’s spectacular when hundred of men form a giant free-for-all, but one can’t command much when this happens. Archers have also been powered down – whereas before they can cut down scores of men, here they merely drop a few guys. Catapults and Trebuchets, on the other hand, are just as fun and cool to use once they become available. Even if you don’t feel like grinding through the campaign map, you have plenty of historical battles (Agincourt, Hastings, Tennenberg) and also a quick battle creator that allows you to organize armies of any sides at any given location. Both of these features are also found in Rome, but it’s nice to have them here as well. To be honest, on the other hand, I think the campaign is much more fun. Running a giant empire, holding off the Mongols, sending off armies off into a Crusade – it’s all here, encapsulating weeks of play, and all of it’s great fun.