It’s hard to describe the Worms series to someone without getting strange looks. They might look infantile, but these are some of the greatest turn-based action games, flawlessly merging silly violence with tactical gameplay. Some just can’t seem to associate greatness with a game that revolves around teams of heavily armed worms taking turns blowing the living hell out of each other. It’s seemingly kiddy-oriented when in fact it is quite a cerebral, strategic experience that plays a lot like chess… with bazookas.

The second Worms spread out to countless iterations, each only bringing marginal improvements and enhancements over the original, and Worms 3D, doesn’t break the mold in that regard. Sure, it’s in bright-and-colorful 3D, but the actual gameplay, despite the extra (and sure to be viewed as unnecessary) dimension, is virtually identical to the previous 2D incarnations. While the 3D engine is much more washed out and not as sharp as its side-view counterparts, it certainly gets the job done. But switching to a 3D world brings with it a host of predictable issues.

The 3D battlefields offer a lot more mobility than the old 2D ones, but whether that’s actually a good thing is debatable. Simply maneuvering the fields feels like participating in a turn-based platform game, where you have to jump across watery gaps, swing from ninja ropes, and use jet packs to reach higher or lower levels. You can even super jump, all of which lends a somewhat different, though still engaging, feel to the overall game in comparison to its predecessors. It also suggests that a Mario-style game involving bazooka- and baseball bat-toting annelids would be really swell. As usual, Worms 3D offers an incredible array of weaponry available for worm-on-worm action: homing missiles, exploding sheep, holy hand grenades, machine guns, kung fu punches, TNT, napalm air strikes, and plenty more. Aiming takes some effort than it did in the 2D days of Worms 2, however. Most of the time, you’re forced to switch to a first-person view, or use the map, to get the shot. Certain weapons—especially the homing missile—are a royal pain to aim effectively. As always, things like wind direction and gravity affect projectile direction.

The controls, however, are far more complicated and also not as smooth as it was in the olden times. The learning curve of mastering movement, aiming, camera, and weapon controls is steep, and you need to develop masterful aiming skills to get through the endless array of pre-made and entirely random battles and missions the game throws at you. This makes Worms 3D more annoying to learn than, say, Worms 2. The terrain is completely destructible, with explosions leaving huge craters and throwing little worms around – part of the fun is still blasting an arena into tiny bits. But the terrain textures are woefully washed out and primitive-looking. 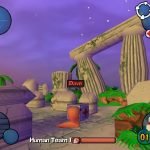 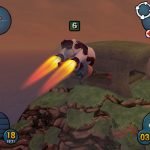 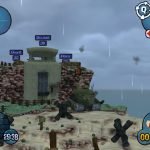 Worms 3D allows up to four teams to compete on the same machine, a LAN, or over the Internet. As always, it delivers fantastic multiplayer action. Few games mix such levels of humor and sadism without crossing the line into tastelessness. When playing with actual humans, the entertainment value skyrockets, although the worm AI in the single-player game is amusing as well.

If there is any one real issue here, it stems from the extra dimension. Beyond that, like every Worms title since the original game, there’s a surprising lack of innovation in the actual gameplay. Admittedly, this is meant to be a simple, pick-up-and-play title, so the fact that Worms still feels the same as it ever did, even in three dimensions, can be viewed as a good thing.