Trapped in a comic book world.

There’s nothing like the battle of style versus substance, and Ubisoft’s XIII (Thirteen) is in no danger of running low on style. Comic book aficionados in general and fans of Jean Van Hamme’s graphic novel with the same name in particular will find this cell-shaded take on the first-person shooter invigoratingly refreshing, even when the action itself will feel surprisingly familiar.

XIII looks unusual to say the least, with it’s mix of exceedingly bloody violence, and an absurdly color-filled world. But while the art might look ripped out of a cartoon, the blood flows freely, thrown knifes stick out of foreheads, bloody explosions rip across your screen in true Batman “Biff! Pow! Kablooie!” style, and the body count ramps up faster than you’d expect. The background for this game – dark conspiracy theory, Euro-style takes on American paranoia, rabid cult following – is mildly comprehensible, but offers an attractive excuse to play through XIII’s thirty-four levels.

The plot is your basic amnesia-suffering super soldier on the run. Who are your friends, and why are so many dysfunctional guys with guns after you? Clichés aside, it moves remarkably well. It merges much of the story elements into active gameplay, so you aren’t as bogged down by cinematics as you could be, and for a while, the cell-shaded violence holds a lot of interest and appeal.

As agent XIII, you are on the run from a well-equipped evil organization, through a lot of snowy landscapes, a bank, a mental institution, urban sprawls, and other gritty bits of level design. At its best. such as when you are holding a human shield to escape a high security bank, the game is thoroughly engaging and thrilling. The animated look manages to heighten the appeal, and it really manages to reach some great heights. 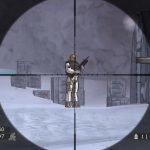 Using the crossbow in a stealth mission. 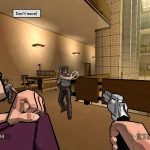 With a hostage, you can establish an uneasy truce with these cops. 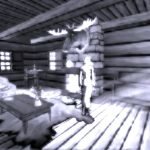 Unfortunately, those moments just don’t come as often as they should here, and gameplay is often mired down by tiresome gunfights, rough attempts at stealth play, and maddening console port restraints. Since this is a cross-platform extravaganza, the game’s console roots show a little too much in the idiotic checkpoint-only save function. There’s actually a “quick save” key, but it only saves the last checkpoint, not your current situation. The array of weapons lets you silently kill with throwing knives, a sniper crossbow, or a sniper rifle, or noisily kill with a shotgun, double barreled shotgun, several machine guns, grenades, pistols, and even everyday objects such as chairs, bricks, glass shards, and shovels. The feel of the weapons and action is excellent. But once you get over the initial feeling of glossy coolness in the visuals, the graphics aren’t quite what they should be. Character designs in particular have a rough edge to them, and the actual animation isn’t refined. The levels tend to look great, however, with some impressively smooth and realistic landscape textures.

Thankfully, unlike many a console port, the multiplayer action includes the usual array of LAN and Internet-based deathmatching mayhem, allowing for cartoon bouts of excess. As for the rest of the game, it’s engaging, but hardly revolutionary.