Ever since 1997’s Total Annihilation, its creator Chris Taylor has been perceived as a man with a vision to be reckoned with. When Gas Powered Games, the company he formed after leaving developer Cavedog Interactive, the gaming community completely expected a real-time strategy game to emerge from its halls. Instead, we got Dungeon Siege. While it didn’t quite live up to its initial promise — its story and gameplay fall a bit flat — its beauty was indisputable.

In further attempt to realize its potential, Gas Powered devised an expansion pack, Legends of Aranna, which showed that the company was certainly on track in terms of how to draw players into the Dungeon Siege universe, which many still think of as Diablo on crack. Taylor has made no secret about his desire to return to the real-time strategy genre, and so it’s no surprise we see a lot of what made the original great return and be enhanced in Dungeon Siege 2.

The story involves an epic and ancient conflict between the spidery lord Zaramoth and his shield-toting foe, Azunai. They sorta destroyed each other some eons ago, but it seems a power-hungry prince named Valdis now wields Zaramoth’s ultra-magical sword. In an interesting touch, you actually begin the game in Valdis’ employ. Eventually, you work to bring about his destruction.

The quests exist largely as window dressing for the click-happy combat—no nuanced conversation trees, here, kids–and they’re fairly standard-issue. Early on, you run into several old genre chestnuts, some variations of which have been cadged from the first Dungeon Siege: The Hunt for the Lost Person, for instance, or the ever-popular Find the Cure for Plague.

Those who liked the old automated system can still use it. For others, the good news is that Dungeon Siege II offers the option to exert significantly more control over the action. Character development, all but nonexistent in the first game, has been beefed up by the power of four. That’s the number of races from which you now can choose (Human, Elf, Half-giant and Dryad), and the number of fighting styles (ranger, fighter, combat mage, and nature mage) in which you can specialize.

Each style has up to 12 different skill-tree specialties you can work through, as well as a set of rechargeable specialized powers—like the arrow-friendly Thunderous Strike—that can be activated with hotkeys. Just like in the first game, if you want to succeed, specialization is critical. Trying to mix-and-match your ranged-weapon skills with a helping of earth-mage spells may sound like a great idea, but it’s actually a quick recipe for mid-game disaster. As you level up and develop said skills, you spend hours hacking through the beautifully rendered environs and the game’s extensive bestiary. Eventually, you run into something with enough hit points to wipe out yor party, and you’re forced to respawn back at a nearby town. Now, you could use the teleporter to jump back out to the front lines, sans your hard-earned magical weapons, and scrap your way to recover the goods from your party’s corpses. But why? After all, there’s a necromancer conveniently loitering right next to the teleporter who’ll happily magic your stuff right back to you for a percentage-gold fee.

It’s touches like these in Dungeon Siege 2, while clearly included to minimize frustration, that contribute to a feeling that you’re really hacking down a gussied-up version of Easy Street. There’s a preponderance of shrines that confer temporary skill bonuses, a teleport spell that’s ridiculously easy to obtain, and a too-helpful quest log that leads you by the nose through every step. In a game where health and mana potions quite literally grow on bushes, the ways in which everything is arranged to make things simple and easy almost seems too much. 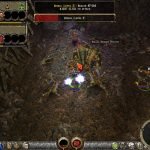 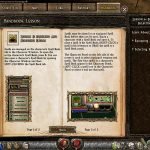 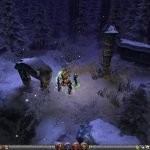 In the original Dungeon Siege, you could recruit and manage up to five other characters at will (or a pack mule) to help you in your quest to save Aranna. Dungeon Siege 2 is significantly more restrictive. Oddly, you’re forced to pay a fee to the local innkeeper for every character slot you add beyond the second. Plus, until you beat the single-player game, your party is maxed out at four. To unleash six and unlock the highest difficulty setting, you have to beat the game twice.

Granted, you won’t be storming these dungeons for the storyline. If you’re like most dungeon-crawlers, you’re playing for the carnage and the loot: the gold, the rings, the boots of freakin’ plus-10 mighty ardor. In this respect, Dungeon Siege 2 features an embarrassment of riches, a risk-reward formula that plays like the best jackpot slot machine ever. As you hack, hack, and hack your way through your enemies, you’ll find yourself immersed in its simple, frantic action that ARPGs are meant to offer.