The original Privateer featured something of a departure from Origin’s traditional Wing Commander gameplay. Gone was the string of largely linear military missions, replaced by an elegant Elite-style open ended game that allowed players to choose their own career paths. Origin was unable to recapture the magic with their sequel – a largely unrelated game known as The Darkening. Then Digital Anvil, an independent developer founded by Wing Commander grand poobah Chris Roberts, has taken to modelling the mercenary lifestyle with Freelancer.

If the name and feel of the game seem familiar, you’re likely thinking of Anvil’s previous sleeper hit – Starlancer – a game unofficially referred by the dev team as a prequel to Freelancer. Unlike said prequel (which explores civilization as still confined within the boundaries of the Solar System), Freelancer peeks into a distant future of Humanity that’s extensively spread far and wide through interstellar space. Colonial expansionism plays a major theme here, with a shot of 1800’s American frontier ambience for good measure. The known galaxy is ruled by four “Houses of Humanity,” each of which hearkens back to the now barely remembered Earth cultures of Asia, Germany, England, and America.

Likewise, while the game’s prequel Starlancer takes after the Wing Commander series, Freelancer closely follows in Privateer’s footsteps. The central thrust of gameplay is a largely non-linear universe. There’s a main storyline that you can always choose to follow, but you will just as easily be able to go off on your own exploring and accomplishing jobs for various factions. The story missions are likewise not as obscure as in Privateer – they always loom in the background, but doing odd jobs on the side is necessary to increase your profits and buy better gear for the ever more difficult story missions. How you choose to get those credits is up to you.

You can be a galactic trader once you figure out the multitude of profitable trade routes, or a pirate, or just about anything else you might care to be at the helm of a spacecraft. The colossal game world trades in many commodities with varying prices on each planet and space station – this system was supposed to be dynamic according to supply and demand, but even with fixed prices it’s a huge undertaking. Choosing the less honest route and raiding merchant vessels will net quicker profits, but you might find yourself pursued by bounty hunters if you choose the pirate’s lifestyle. As in Privateer, the player starts the game with a low-class ship, but keep working hard and you’ll afford a bunch of cool stuff – a large variety of new weapons and upgrades will be steadily unlocked as you explore, and everything from your weapon stations to cargo space, shields and thrusters can be upgraded. 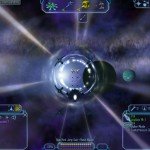 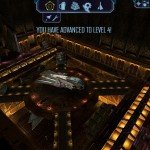 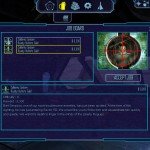 The key element of Freelancer’s interface is simplicity. The objective is to have a game that can be played right out of the box, with no need to “learn 30 hot keys before you can even get started”. Planet-side navigation will be a point and click affair, and piloting the ships will involve little more than aiming and firing until the player begins to acquire new hardware. Though the control system is far from the WWII dogfighting paradigm used in most space sims, it’s still fun. Targeting, maneuvering, and combat are all driven by the iconic interface, but the feel is very tactical nonetheless. Freelancer is huge. You can travel to that distant planet in the background.

Other than that the game universe feels positively alive. You can hear radio back-chatter between pilots all the time, even those of your enemies in a heated battle. As you travel through a space at cruise speeds you notice distant planets start to move, and realize that in fact they’re real objects and not just a bitmap image as so often is the case with space sims. In fact the universe is huge – load times are merely set between huge chunks of space, so you can manually travel between one end of a sector to another. The sense of scale reminds one of Independence War 2, as do the vibrant graphics and epic space battles.

It does tend to get a bit stale with so many freelancing jobs essentially being ‘kill this group of rebels’ or ‘catch this bad guy’, with a genuine lack of escort or fetch missions (on higher levels you’ll do more challenging jobs, like taking out entire bases). Thankfully the ones pertaining to the story (an intriguing story at that) fare much better. In the end Freelancer should especially entice Privateer fans, but really anyone with an appreciation for hectic space combat set in an open-ended universe should apply.