The old Infinity Engine has been around for a long time on computers. Baldur’s Gate, Baldur’s Gate II, Icewind Dale: Heart of Winter and their expansion packs combined span a total of four years – a long time for any engine, and an almost certain recipe for failure given the rate of technological advancement. But Icewind Dale II doesn’t feel that dated when compared to its predecessors – solid gameplay courtesy of the D&D 3rd Edition Ruleset, an interesting story and overall good design help make it a worthwhile adventure.

The story picks up many years after the events of Icewind Dale, in the region of the Forgotten Realms known as The Spine of the World. Things get rolling in the port town of Targos, where the lord of the city has issued a call for heroes to help beat back an uppity goblin army that’s somehow managed to breach the town’s wooden defense perimeter. Your peppy band answers the challenge and sets sail for Targos to convert another raging horde of bloodthirsty fiends into fertilizer.

Unlike the more story-driven Baldur’s Gate titles, the Icewind Dale series is definitely in the “combat-oriented” category. Even with all of the action, the writing here features some of the richest and most enjoyable dialogue since Planescape Torment. I kept clicking through the dialogue trees half-expecting the conversations to devolve into the mundane, but they maintained a quality of charm and purpose. Sub-area descriptions (accessed by clicking on specific locations, objects, or devices) are plentiful, rivaling Baldur’s Gate as far as depth.

But combat is most definitely the main aim. You’re flung into the thick of battle just minutes after disembarking at Targos port. From there, it’s a wild ride through glacial cityscapes, and from spooky dungeon crawls to uber-arctic battles. Through the game’s six chapters you’ll lay your vengeance upon the hordes of evil and travel for miles from the Dragon’s Eye to the Underdark and beyond. It’s still fairly linear stuff, but it’s all worth following. 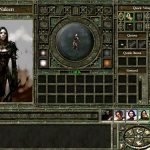 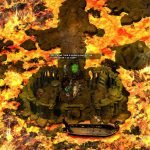 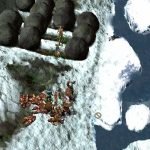 The engine’s been tinkered with, too, allowing for some enormous battles with dozens of monsters. Like never before, group-combat tactics will play a critical role towards success. The only glaring omission occurs in the journal screen, which has been reduced to one view per chapter. What happened to the trusty old “quests outstanding” and “quests completed” views? Flipping through this stacked accumulation of text can be a complete drag. The world of Icewind Dale II is packed with opportunities, so expect an adventure measuring about 60 hours, or a couple of weeks’ worth of gameplay. Then there’s the “Heart of Fury” mode, which, if you find the game too easy, hops up all the monsters on steroids (thus increasing their experience value) and unlocks dozens of high-level items, much like the Hell and Nightmare modes in Diablo. Add to that a stack of diverging secondary quests, literally hundreds of spells, monsters and items and what you get is a heavyweight in computer role-playing.