Silent Hill 2 adheres to the standard survival-horror formula: beautifully creepy graphics and sound effects, a haunting narrative and a great deal of crimson juices splattered all throughout. Streaked with blood, rust and grit — and presented with a distressed, grainy visual style — the chilling atmosphere of Silent Hill 2 will have you itching for a shower to remove the filth.

The horror of the game, however, lies solely in the masterfully presented decorum – the epileptic flesh monsters aren’t as menacing as they are inevitable. Cleverly announced in advance by static and unearthly cries, they plod toward you, ever so slowly. You slay the ghoulies with conveniently mislaid iron bars, pistols, shotguns and assorted ammunition, and explore the derelict ghost town by chasing ghosts yourself. The story in Silent Hill 2 revolves around clerk James Sunderland who has suffered through the traumatic experience of his wife’s passing from an unknown terminal illness. Then he receives a letter from her beckoning him to come to Silent Hill (where they’ve spent their honeymoon together years past). A faint glimmer of hope compels James to visit the town and perhaps even reunite with his dead spouse. Along the way James will meet other equally distraught characters on their own journeys, eventually learning what brought them to Silent Hill as well.

As is the hallmark of this series, the plot is morose and incomprehensible at first, but reveals its subtle nature upon closer examination. Occultism and religion, main themes from the first game, have been largely swept aside in favor of exploring darker avenues of humanity –  rape, death and dying, suicide or murder – with miserable, barely coherent characters all seemingly on the verge of a psychotic episode.

Every aspect of the town is seen from the prism of each character’s broken persona, a clever device that encompasses everything from the way monsters appear to reflect (in our case) James’ personal demons, to Silent Hill’s decayed look and claustrophobic feel. In this sense the game is as much a game as it is a Rorschach test laden with hidden meaning and metaphor. For example, you’ll get more than a fair share of glimpses of James’ dead spouse while exploring the town, but they’re very subtle — a mannequin with familiar dressing here, a blood-written message in a dark alley there, dead bodies that look eerily similar to James, or monsters that are grotesquely sexualized.

The locations you’ll visit will number many areas from the abandoned town – there’s an extremely creepy set of old apartment buildings early on, a hospital with zombie nurses (you can’t have a Silent Hill game without ’em), a derelict prison, hotel and parts of the town itself that you must explore in both foggy daylight and dreadful nighttime hours.

What’s fantastic is that most of these areas are built to real-life scale to give them more authenticity, from the town at large to the many buildings you can enter. Artificial boundaries naturally limit your character to a few paths – streets in Silent Hill suddenly stop and drop into the abyss, as if the patch of ground you’re walking on is removed from normal space and time, and so often doors inside structures have magically broken locks that can never be pried open. Yet this nonsensical approach is sensical considering the alternate reality James is treading on. Clearly he’s not in Kansas, so why should the world around him have some sort of logic? 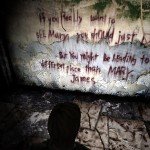 Explore the town long enough and you’ll find dark little secrets like this. 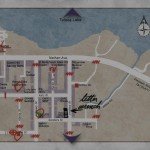 Silent Hill is confusing to navigate. Thank goodness for this map. 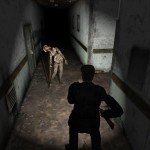 Silent Hill 2 isn’t far removed from its predecessor as far as gameplay, which is fantastic if you love survival horrors, but again it is marred by the usual console porting culprits. The camera can be sheer torture when walking around tight enclosures. Although you do have some degree of control over it, it’s not uncommon for it to lock in place when you’re trapped in a corner (or when a fixed external camera is employed) thereby obscuring potential monsters right in front of your character. Thank goodness for the radio, a clever little device that emits static whenever monsters are nearby, an effect that is both useful and very creepy. But monsters are surprisingly mild mannered despite their menacing appearance. You can simply run past them when on the streets, and inside you need them dead because they’re blocking your path. Combat is generally clunky, especially if you’re resorting to non-projectile weapons, and the repetitive repertoire or three or so monsters throughout the game eventually wears one down. But it’s definitely worth learning the controls in the end. Deep and thoughtful in its gloomy presentation, with interesting characters and a moving soundtrack, Silent Hill 2 is an absolute classic of a survival horror.